Nigerian pop singer and song writer, Reekado Banks has announced his exit from the record he started from, Mavin Records to pursue bigger opportunities.

This announcement was made on social media by the Blessingsartiste where he stated that although it is painful to leave the family that made him who he has become in the past five years, it is imperative he takes this action for the sake of his growth despite his love for the records. He said;

Leaving of course, doesn’t mean severing ties, but moving ahead to build himself from where he is about to stop with Mavin.

This act was applauded by many in the industry and this is especially because of his unconventional method of exit which is like none other in the Nigerian music industry considering the history of bad blood or controversies such move from an artiste has possibilities of stirring.

To show their support for the artiste and make fans know that Reekado Banks is leaving the records under good terms, the official Instagram handle of Mavin Records commented under his announcement, wishing Reekado success as he moves further in his music career. 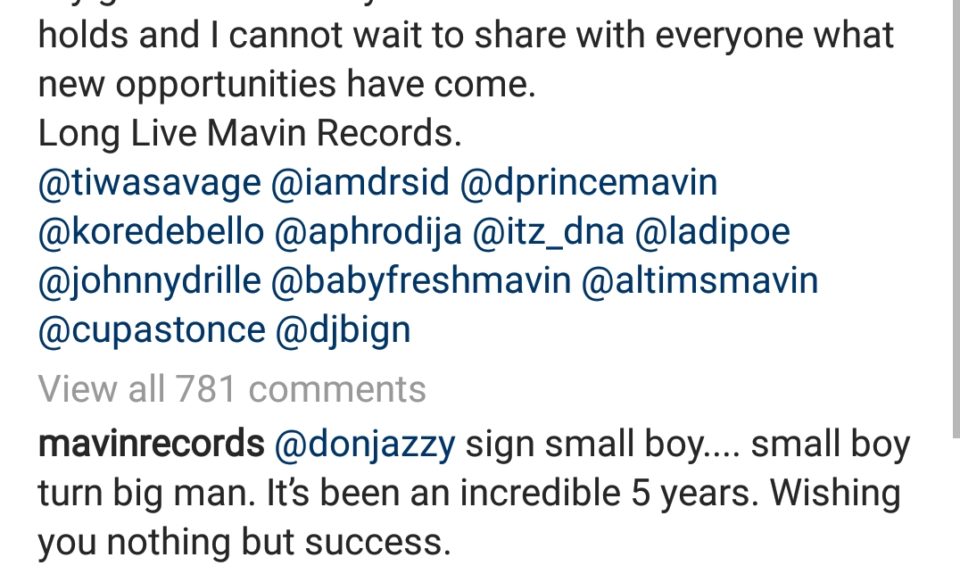 Reekado Banks was cited by the Mavin boss, Don Jazzy in 2014 after his brother submitted some of his songs to the label during an online talent search.

The singer, on the day of his signing, 21st of February 2014, also released his official first single under the Mavin Records called ‘Turn It Up’ and it featured the sexy singer and Mavin Diva, Tiwa Savage. After signing, the singer has gone ahead to release hit tracks under Mavin such as ‘Oluwa Ni’, ‘Standard’, ‘Like’, ‘Pull Up’ and fans recent favourite, ‘Blessings On Me’.

We look forward to more great works from Reekado Banks as he moves on to greater things in his career.

Give us a try today and you will see how massive we can push your song to the street within a limited time. At AlabaMusic Media "Your Fame Our Aim!"

Friendship Test: Singer Davido tasks his friends to gift him N1million each

Gospel: Prospa Ochimana – Out of My Belly

Gospel Mixtape Of the Week

Gospel Of the Week

Music Of the Week

Video Of the Week